Common wisdom cites Kodak as the creator of the home photographic hobby in the late 1880s and into the 20th century. It is correct, to a degree. Early cameras were massive contraptions of wood and brass, kind of elite cabinet making, complemented with a crude lens and media holder. They were not easily portable, more of a luggable. There were only a few such style cameras made by Kodak, where they bought out the competition and available new technologies. Kodak took over manufacturers such as Blair, Folmer and Schwing or Rochester and continued with their product lines to be made famous as Kodak models.

Kodak’s contribution in bringing photography to the masses was via selling volumes of simple, no-frills, cheap cameras. Box style or folders, cameras were still too large to be truly defined as so-called vest pocket cameras. Kodak’s business model relied on selling film, so as long as competitor’s cameras used Kodak made film, Kodak had no pressing incentive to produce better cameras.

The early 1920s saw new winds blowing from across the ocean. Germany, heavily burdened by reparations imposed at the Versailles agreement’s, was in dire need of hard currency. Reparations payable were equal to about 100,000 tonnes of gold, nearly half of all the gold mined in the world till date, and quoted in gold. There was no practical way for the post-war German government to come even close to that. Guess it was meant to devastate the German economy for generations to come.

An alternative to the non-existent gold was hard valued goods, such as steel, coal and industrial products. Germany gradually defaulted on these payments, so France, followed by Belgium, invaded the Ruhr valley, cutting away the productive mining and industrial area. That had left Germany with one option to gain hard currency – industrial export.

Assuming the winning nations of WWI had noble and just intentions, the pressure on the German economy brought upon hyperinflation and unrest, which within two decades brought Hitler to power and caused a human-made disaster and the holocaust. As said, the road to hell is paved with good intentions.

Back to photography. In the early 1900s, Kodak’s mainstay was medium format films. The new photographic wonders from Germany, by Leitz, Zeiss and Ihagee, amongst others, used a new format, the 35mm film. Kodak was no longer the only game in town. The European made cameras were better than Kodak had ever made or capable of making.  Even decades later, the top five American made cameras*, three of which were Kodaks, could not practically compete with the imports. Later on, In the 1940s, when Kodak tried making homegrown fully featured cameras, the results were unpractical devices such as the Chevron and the Medalist.

With a market receptive for a better camera, homegrown makers as Universal and Argus at one wing and the German imports at the other, Kodak needed a camera to hold the fort. It had to be advanced enough to appeal to the upcoming generation of demanding photographers and priced to compete. Leica cameras were sold at about $200, so this could be used as a reference point.

Developing such a camera line is a tedious process, and I am not sure if Kodak could meet the quality offered by the imports. Kodak needed a solution fast. German manufacturers were easy prey, so Kodak shopped there and ended up buying a new startup headed by August Nagel, an ex Zeiss camera designer. Nagel made medium format folders and a few miniatures, all held in high regard by the industry. Kodak brought their marketing network and the financial muscle to the deal; Nagel brought expertise, experience, and innovation. Kodak pointed Dr. Naglel in a direction and wisely left him to do his wonder.

Nagel’s single most important achievement was in a minor detail, which had later become a part of most cameras made: the 35mm cassette. The format had been available earlier, but the single cassette configuration and daylight replacement made the difference. Kodak keeps mum about the cassette origin, do not explicitly says that it is their development.

The early camera prototype in the Retina line was a monoblock, but the first production camera was a small folder, or klapp, fold in German. A similar concept to the popular folders of the time, but smaller, shorter focal length, attention to detail, better finishes, advanced features, and best of all, palatable price. The price for the first Retina was USD 52.50, cheaper than other similar cameras. This price equals just under USD 1,000 in today’s worth. The early models enjoyed moderate sales, to be picked up later with each consecutive model.

The war stopped the supply of all European imports to the US.  The first post-war Retina, the 010, suffered from production inconsistencies and saw slight changes and finishes as parts supply built up.

There were three model families, defined by Kodak as Retina as I, II and III. However, this selection does not mean much. Excluding the odd ‘S’ models, the classic Retinas have 26 klapp and eight monoblock bodies, 19 viewfinders and 15 rangefinders, 15 series I, ten series II, four series III, two marked Retina only and three marked Retina Automatic. All that in happy disarray. Post-war camera models began with 0, but overall model numbers and order of introduction do not correlate. All that means nothing to an individual camera but is very confusing to the collector.

Retinas were made in Germany and, to a smaller extent, assembled UK and France for the local market. That is why some models are freely available in some countries or continent while scarce elsewhere. This is also demonstrated in the model numbering, such as IIa, IIb and so on, where cameras are almost identical but destined to different markets.

As early models progressed, there were sometimes unremarkable differences. The models kind of evolved rather than redesigned. Changes could be in the exposure counter placement, rewind release location, wind and rewind knobs diameter and height, while the rest remained unchanged. See the sketch below for a demonstration of series I evolution. New models came to market while earlier models were still on the shelf. Add to that, while transitioning, some models carried a mix of fresh and previous features, and lenses or shutters cheerfully intermingled, so model identification could sometimes prove difficult. It is also evident with models with or without an accessory shoe and speeds variants

The influx of single lens reflex cameras made interchangeable lenses a must-have. To make up for that, in later Retinas, the front lens element could be replaced with either wide or long lenses, with matching viewer compensation masks.

The table below lists the Retina models by introduction year order. I sourced the data from four printed books, complemented with reliable (I think) online sources. Not surprisingly, data does not line up, with different information stated. I will appreciate corrections and clarifications where needed

This page came to being as I could not find my way within the Retina models. I have 15 Retinas on the shelf, ranging from I to III. I will add specific information later.

User manuals see at Butkus site. Current Retina and all other camera see at Camdex, the classic camera project. 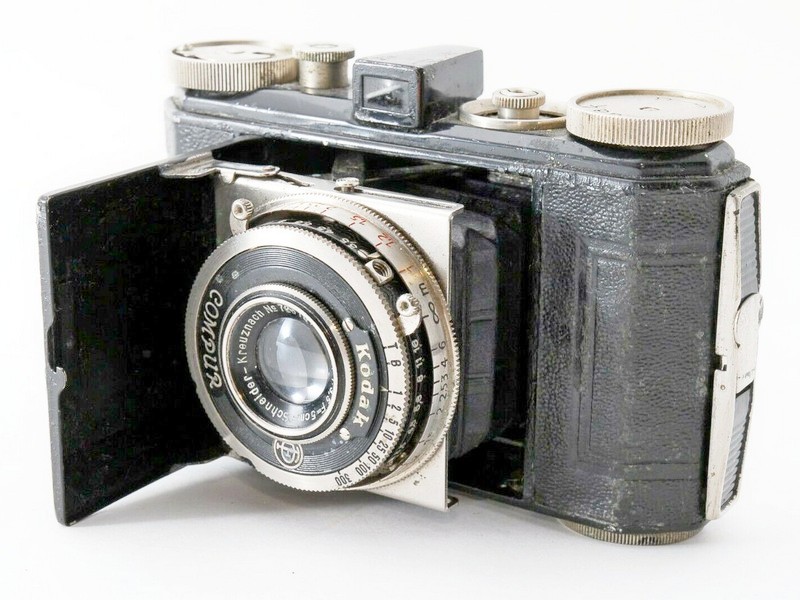 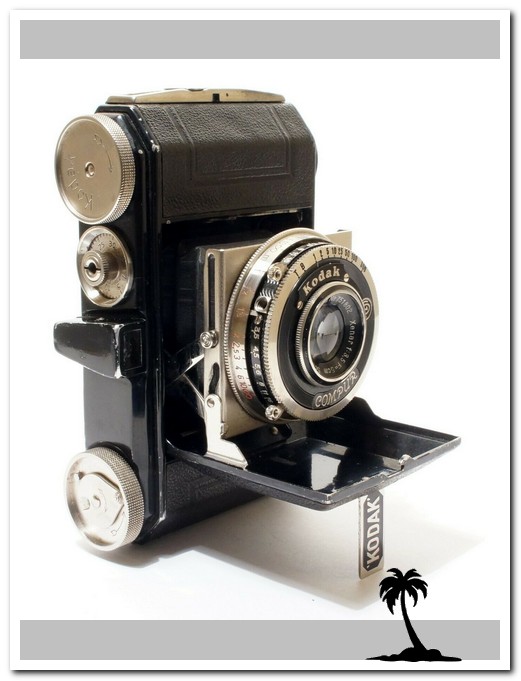 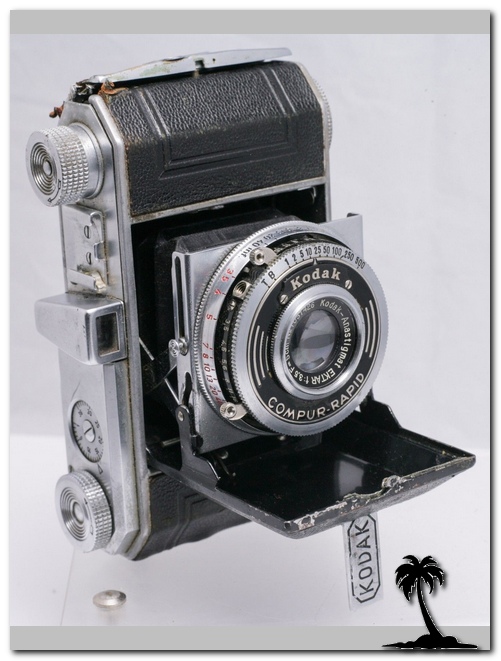 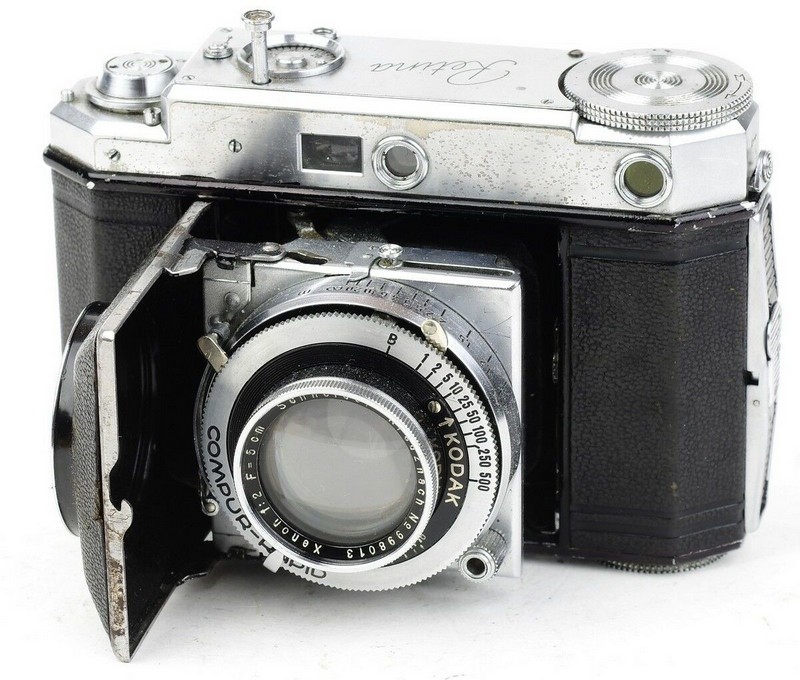 Similar to #126, with or without an accessory shoe. Shutter knob on top instead of the lens barrel. Bright top and bottom, proud viewer. Frame counter larger than earlier models. Speeds: T, B, 1-500. Common lens: Ektar / Tessar, 3.5/50. Shoe: Cold. 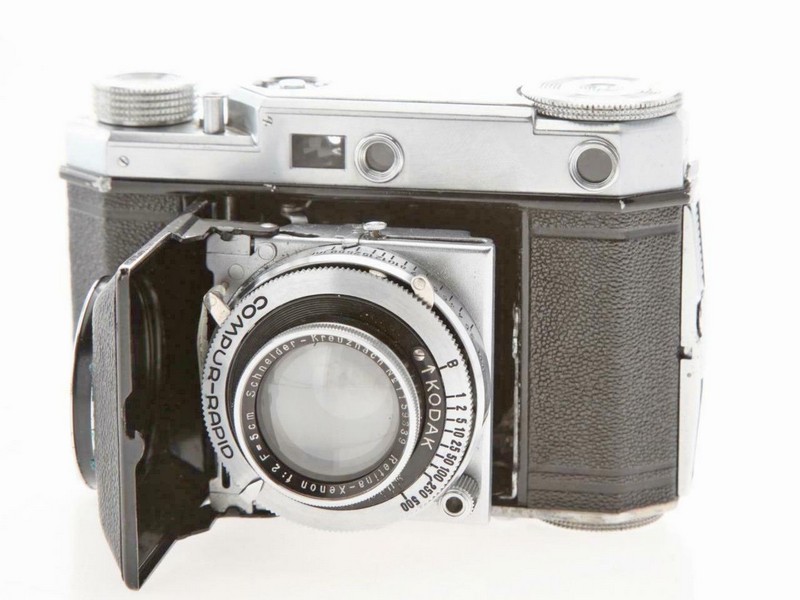 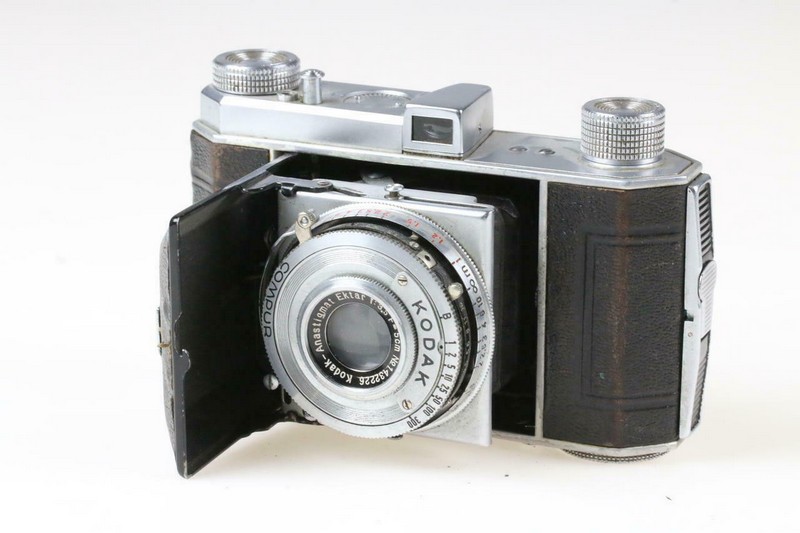 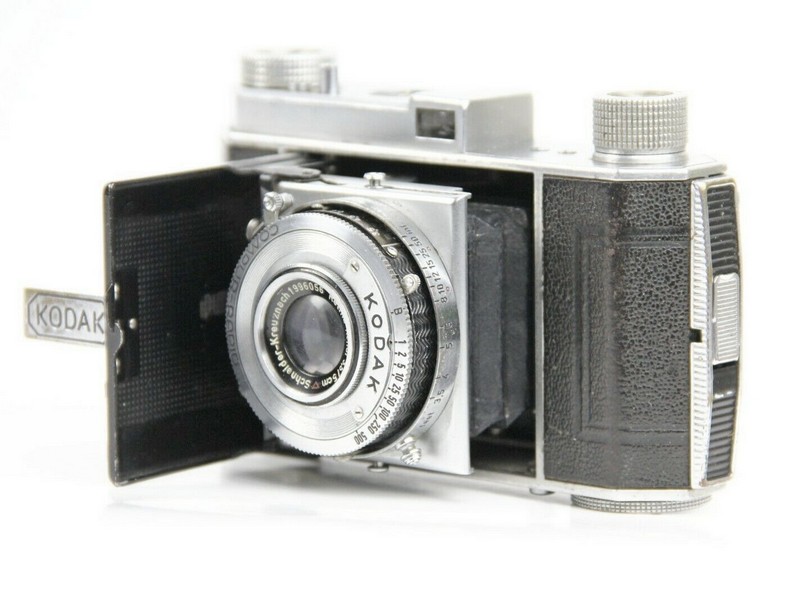 First post-war Retina. Offered also with Zenar and Rodenstock lenses. Made of prewar parts complemented with newly made parts, so models may be inconsistent. Some models offered with a cold shoe while others with two threaded holes to accept same.  Speeds:  B, 1-500. Common lens: Ektar / Xenar,  3.5/50. Shoe: Cold. 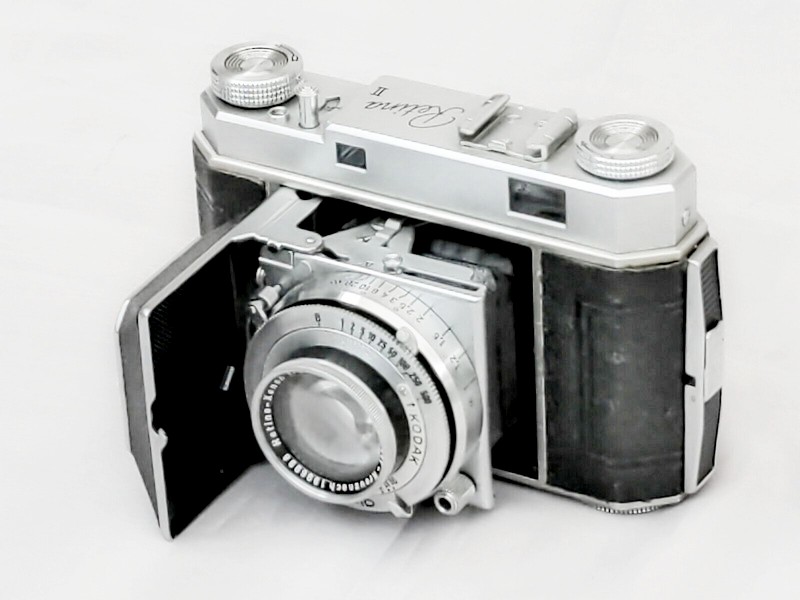 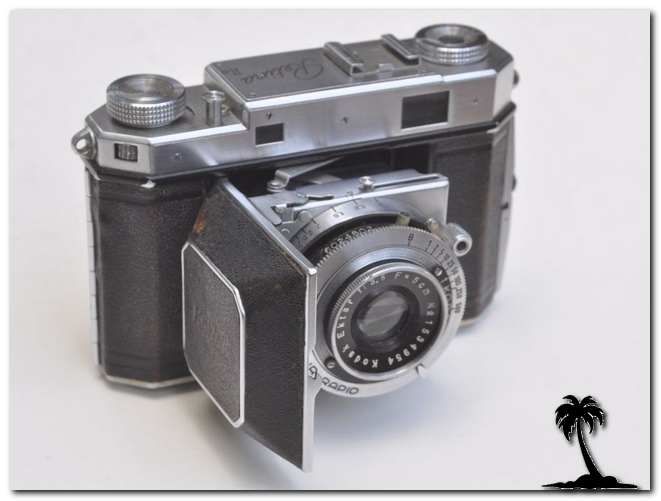 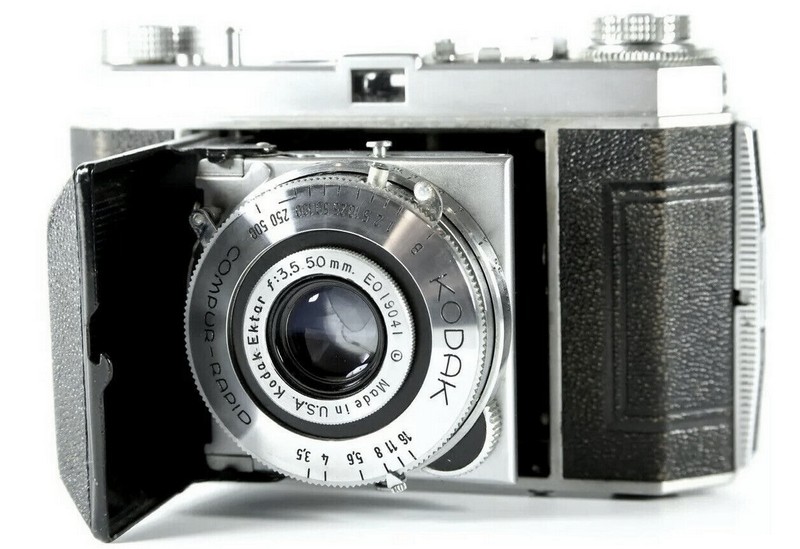 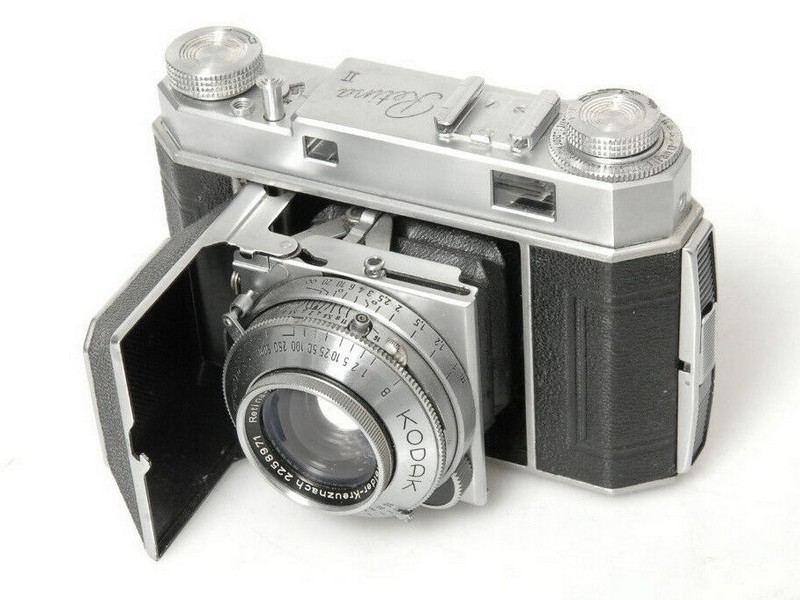 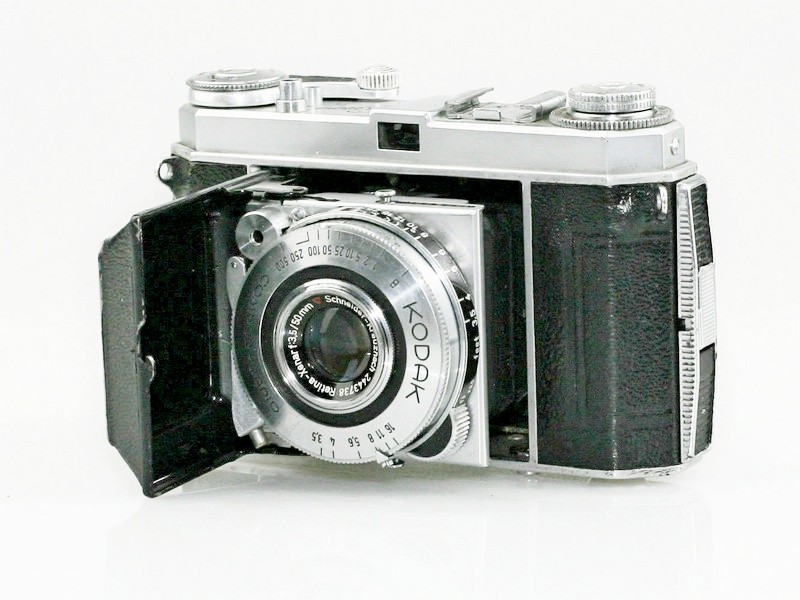 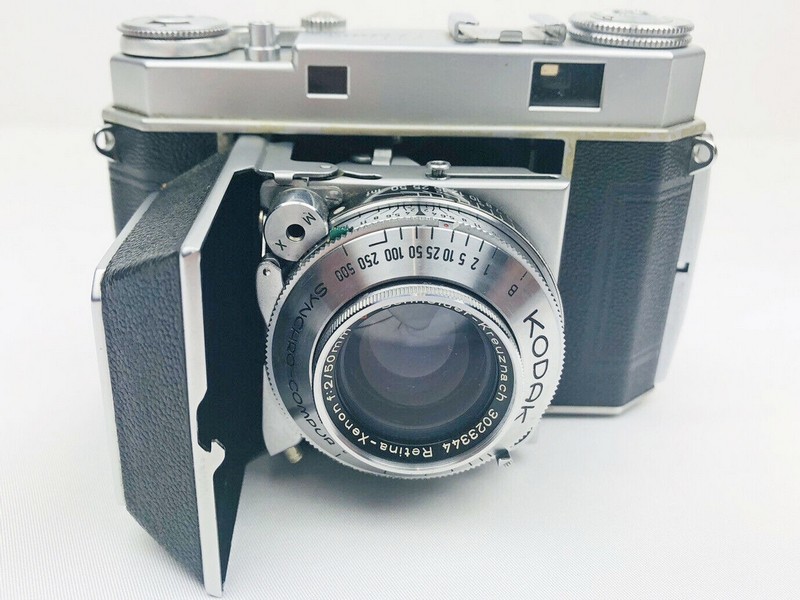 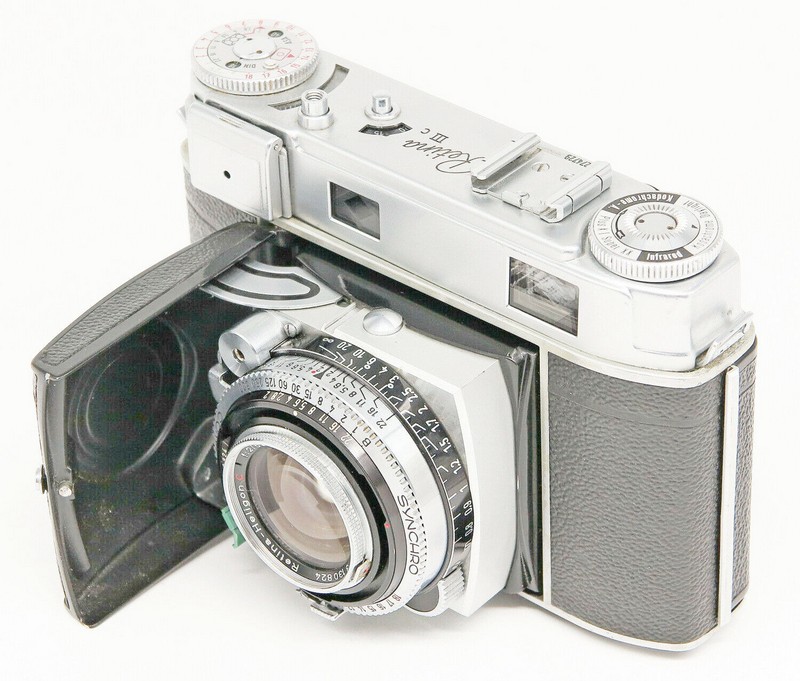 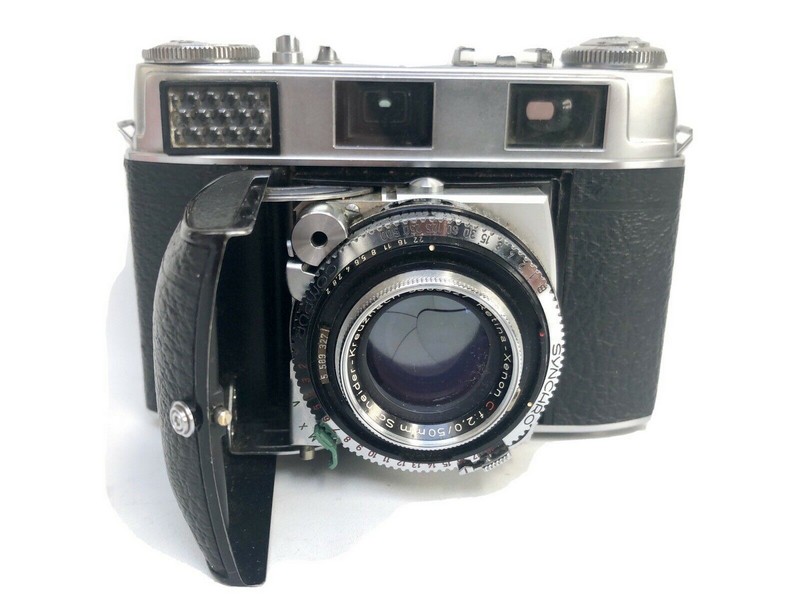 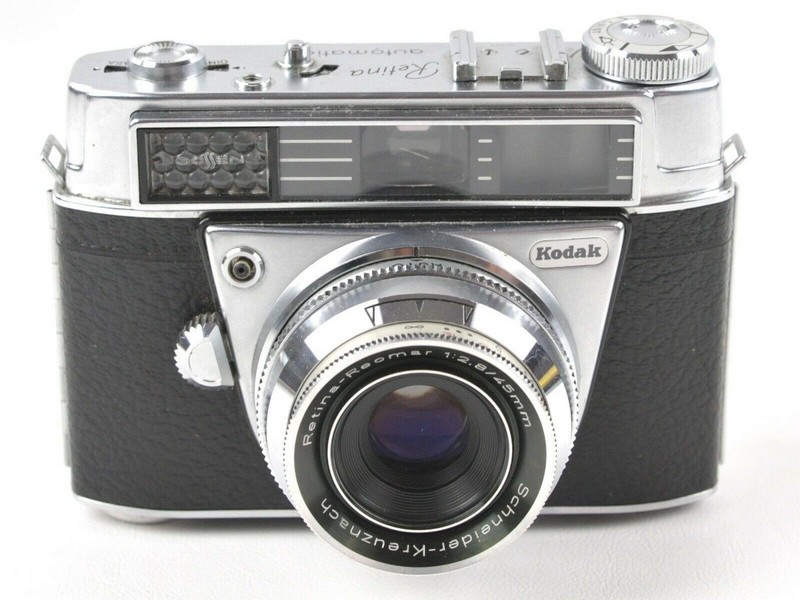 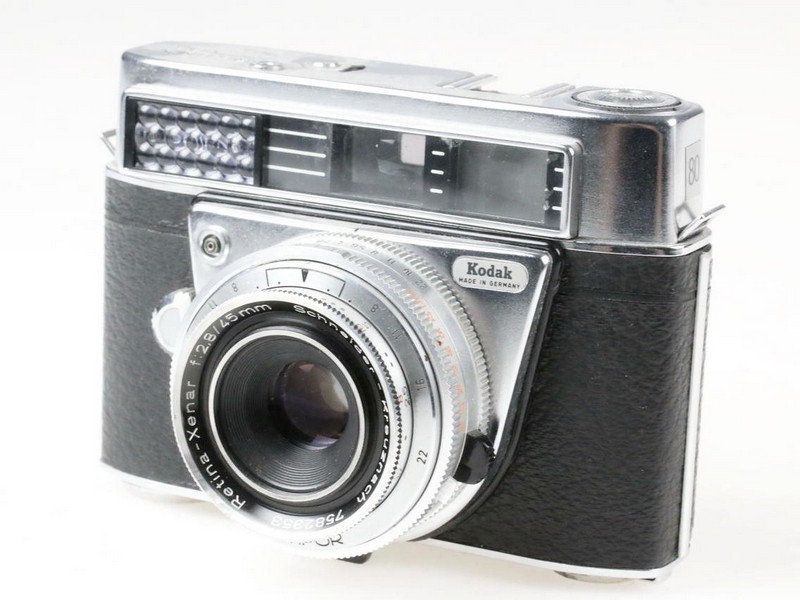 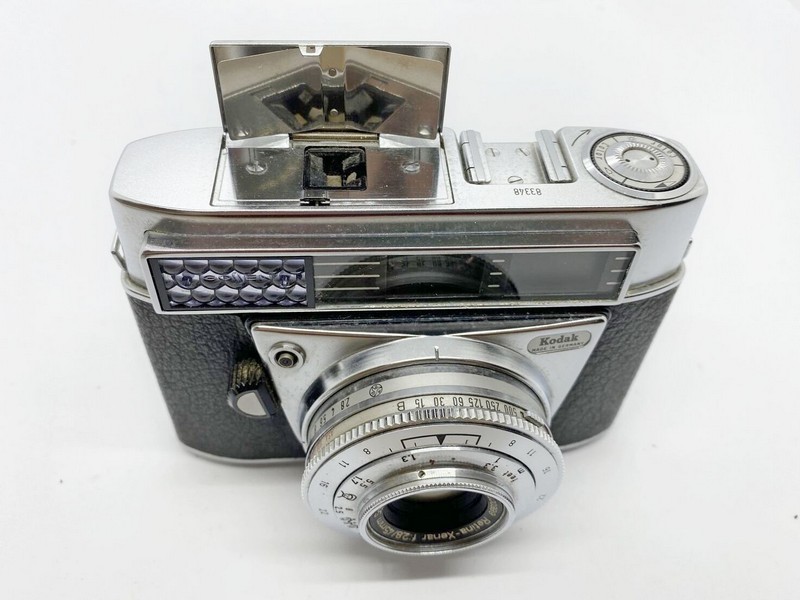 Similar to the # 38. Rewind knob pops up with pressing of the rewind release. Frame counter at the camera bottom. Aperture ring shows value in the finder window. Built-in flashbulb socket covered with a pop-up reflector. A V625U battery used for the flash. Speeds:  B, 15-500. Common lens: Xenar,  2.8/45. Shoe: Cold.  Flash bulb socket. PX625 battery for the flash only. 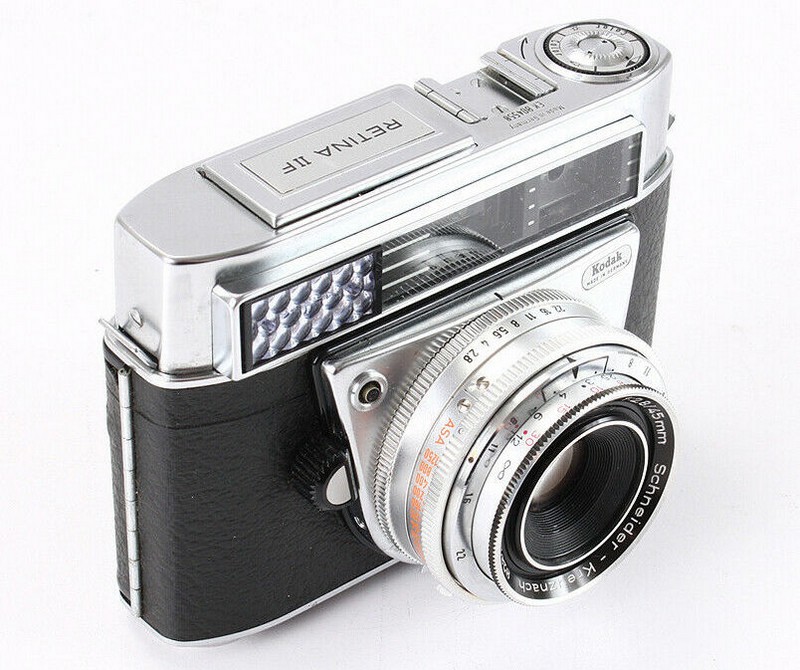